Sleep-related issues are problematic for anyone who suffers from them. They run the gamut from short-term trouble falling asleep to full-blown sleep disorders that persist for years. Sleep problems can be particularly troublesome for people with autism spectrum disorder, also known as ASD.

Difficulty with sleep can affect adults and children with ASD in two ways: by exacerbating autism-related symptoms and causing issues related to sleep deprivation or excessive sleep. Learning how these disturbances impact people with ASD can help parents and partners understand the challenges of sleep and autism, and explore ways to relieve symptoms.

Note: The content on Sleepopolis is meant to be informative in nature, but it shouldn’t take the place of medical advice and supervision from your healthcare provider. If you feel you, your child, or partner may be suffering from any sleep disorder or medical condition, please see a trained professional immediately.

What is Autism Spectrum Disorder?

ASD is a common neurodevelopmental disorder that likely results from a combination of genetic and environmental factors that impact the brain’s structure. (1) Autism may be recognized in infancy, but typically becomes more pronounced in early childhood. Though symptoms vary in severity, they often interfere with daily life and impact academic and social functioning. 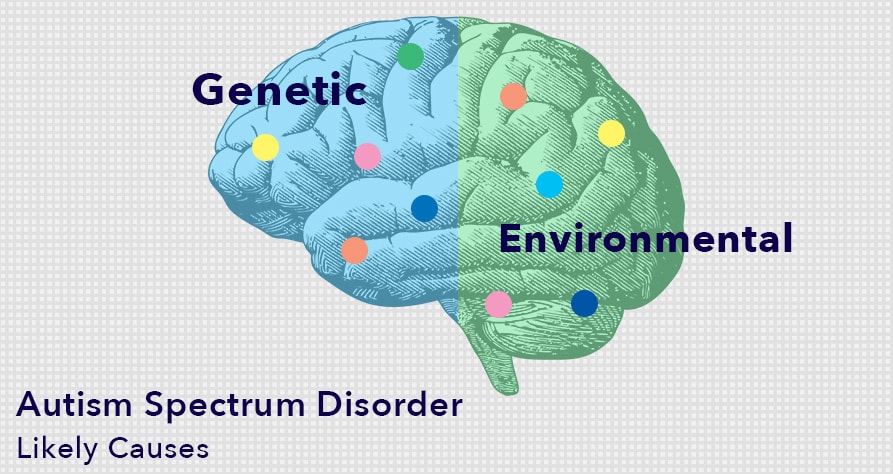 Signs and symptoms in both adults and children might include the following:

Other common symptoms include unusual body postures or facial expressions, the need to abide by strict routines, and a preoccupation with certain objects or rituals. People with autism may have trouble expressing their needs, and lose academic or language skills they once had as they get older.

Some people with ASD show fewer or less severe symptoms than others. ASD may or may not involve intellectual and language deficits. (3) Some people with ASD are able to attend school and work, while others are severely impaired, with significant problems learning, functioning, and living independently. 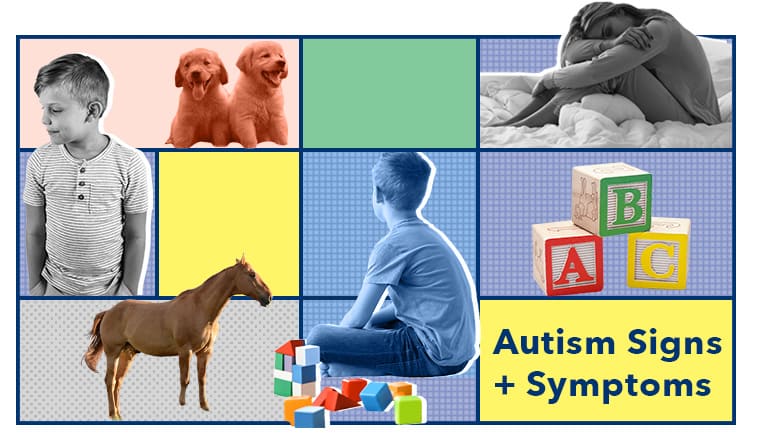 Criteria for Diagnosis of ASD

Autism used to be divided into distinct types, such as Asperger’s Syndrome and Rett Syndrome. These variations in behavior  are now included under the broad term Autism Spectrum Disorder. Autism is called a spectrum because of the wide range of symptoms and symptom severity.

According to the criteria of the Diagnostic and Statistical Manual of Mental Disorders (DSM-5), symptoms must be present in the early period of development to be considered autism, though they may not be recognized until certain developmental milestones are delayed or don’t occur. (4) In addition, symptoms must not be better explained by another disability.

ASD is classified in the DSM-5 by the following levels of severity:

Effects of autism depend on the level of impairment and each individual’s abilities and personal circumstances. Effects of the disorder will be also impacted by early treatment and level of support. Some people with ASD will experience only a few of the possible effects, while others will experience many more.

Common effects of the disorder include:

Sleep problems are also very common in people with autism spectrum disorder, no matter how severe their other symptoms. (6) Sleep issues may be one of the first symptoms that appear in early childhood, and continue for a lifetime.

A significant number of people on the autism spectrum experience difficulty sleeping at some point in their lives. (7) Persistent difficulties may be an indication of a sleep disorder. Sleep disorders disrupt, change, or affect sleep in unfavorable ways that can impact health and quality of life. Poorer sleep in people with ASD is associated with worse cognitive, social, and intellectual functioning.

As many as 80% of people with autism have trouble sleeping. Children with ASD spend less time in REM sleep than other children, and sleep about an hour less at night.

People with ASD may experience a range of sleep symptoms, including: 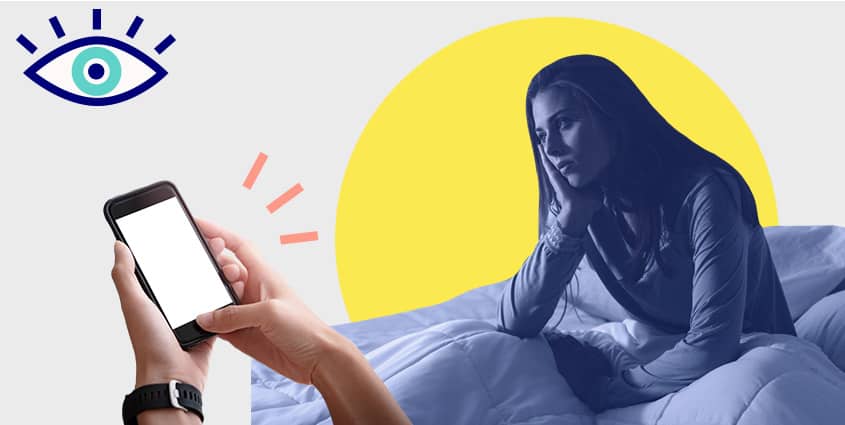 Sleep problems in people with autism can also cause increased stress for family, friends, and caregivers. People with ASD often become more symptomatic when sleep-deprived or if their sleep patterns are disrupted. This can present as increased hyperactivity, lack of attention, or other behavioral problems that may not appear related to sleep. Mood, coordination, and appetite are affected by poor sleep, and can indicate disrupted sleep even if the person with ASD does not appear tired.

Sleep disorders occur frequently in autism, though symptoms may be different than in people without ASD. Insomnia is one of the most common ASD-related sleep disorders, and can be a problem in both children and adults. Symptoms may include:

People with autism may suffer from other common sleep disorders, as well. Bedwetting is more common in children with autism, and nightmares can be more upsetting for children with sensory deficits. They may also experience sleep disorders that are unrelated to autism, such as restless legs syndrome, narcolepsy, and sleep apnea. These disorders can worsen autism symptoms, or be made worse by the sensory issues typical of ASD. (8) 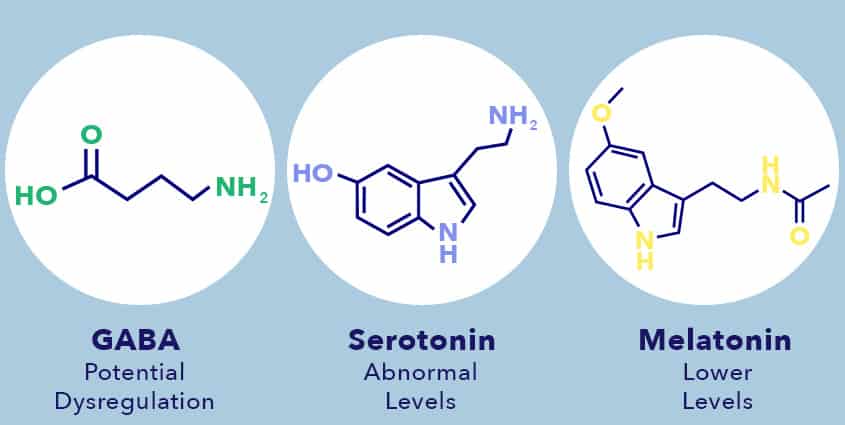 Autism appears to involve a dysregulation of GABA, which can disrupt sleep. People with ASD may have abnormal levels of serotonin, as well, which can affect the activity of “the sleep hormone” melatonin. (9) Numerous studies show lower than normal levels of melatonin in people with ASD. Current research points to a combination of cognitive and neurochemical factors that predispose people with autism to poor sleep. (10)

The Circadian Rhythm and Autism

The circadian rhythm is the 24-hour biological clock that regulates sleep using light and darkness cues. The circadian rhythm depends on three primary factors to regulate sleep and waking: light, time, and the release of melatonin. The master clock is located in the hypothalamus of the brain, and can also be found throughout the body in smaller “local” clocks in organs and muscle tissue. 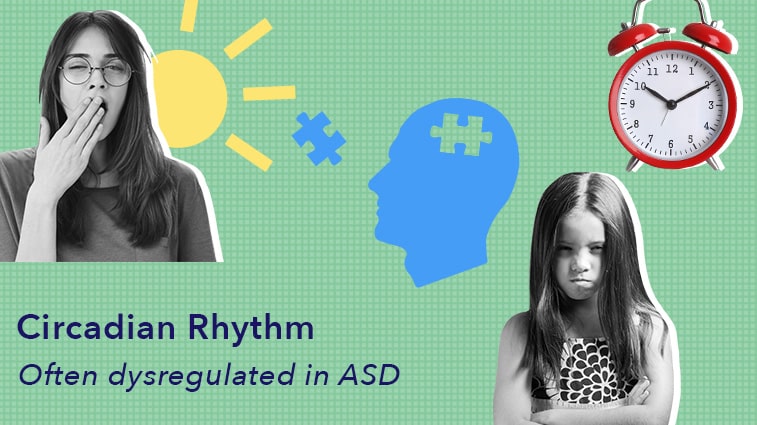 Separate studies on congenitally blind and deaf children show higher rates of autism in the blind children only. This suggests that the inability to process light signals through the eye might influence melatonin release, contributing to circadian rhythm dysfunction and ASD. (12) (13)

Sleep Tips for People with ASD

While sleep issues are difficult for people on the autism spectrum, certain strategies such as good sleep hygiene can be helpful. (14) Caregivers of people with ASD might try the following tips: 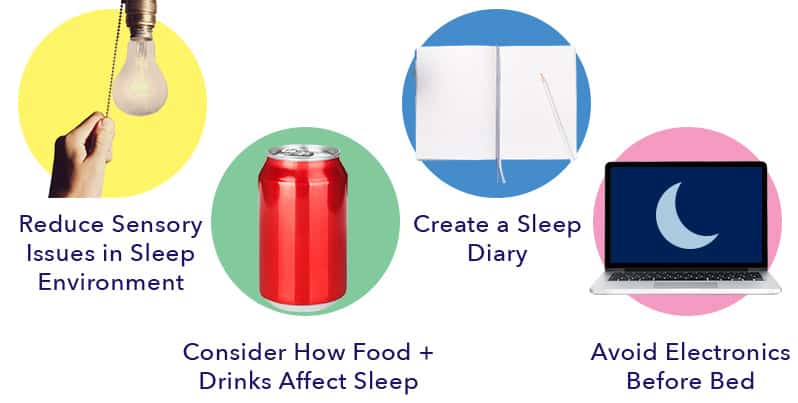 Autism Spectrum Disorder can have a significant negative impact on sleep.  People with autism of all severity levels might have trouble falling asleep, staying asleep, or falling back to sleep, or they might sleep excessively. Some may experience nightmares and other sleep disruptions related to sensory issues. Good sleep hygiene and other healthy habits can help people with ASD reduce anxiety and establish a reassuring routine that promotes sleep. There may also be a role for medications and natural or over-the-counter sleep supplements. Most of these are for short-term use only, and should be used under a doctor’s supervision.

More research will help us understand the link between sleep and autism, and may lead to additional treatments that help people with ASD sleep better despite the challenges of their disorder.