Sleepwalking, also known as somnambulism, is a type of parasomnia, a sleep disorder characterized by unusual behavior, vocalization, or movement during sleep. Sleepwalking occurs during the deepest stage of sleep, known as N3 sleep, which predominates during the early hours of the night. More than 8 million Americans sleepwalk, or nearly 7% of the population. (1) 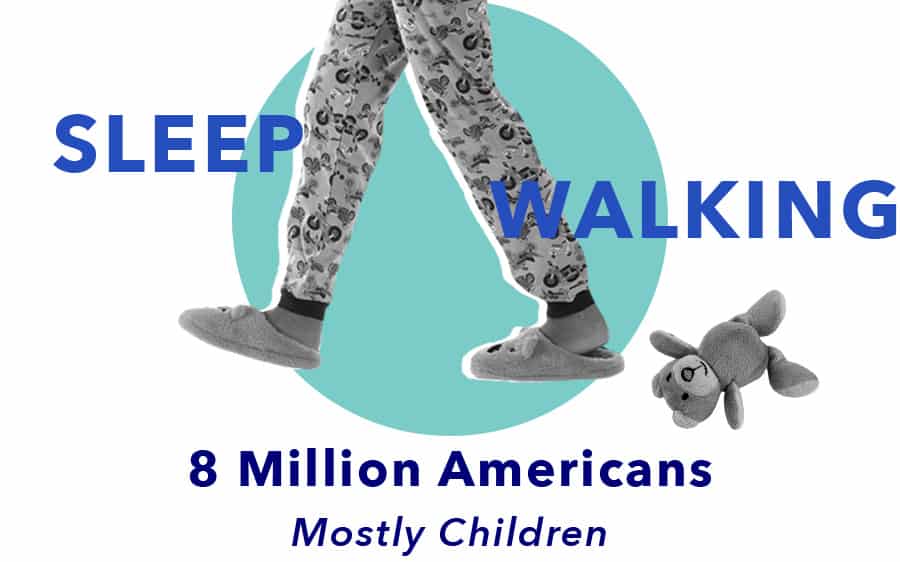 Symptoms of sleepwalking often appear in childhood. Though the disorder typically affects children and resolves on its own in late childhood or adolescence, it affects a significant number of adults. (2)

Sleepwalking usually occurs during deep sleep but can also take place during the lighter sleep stages. Contrary to its name, sleepwalking may involve more than just walking during sleep. Signs and symptoms of the disorder include: 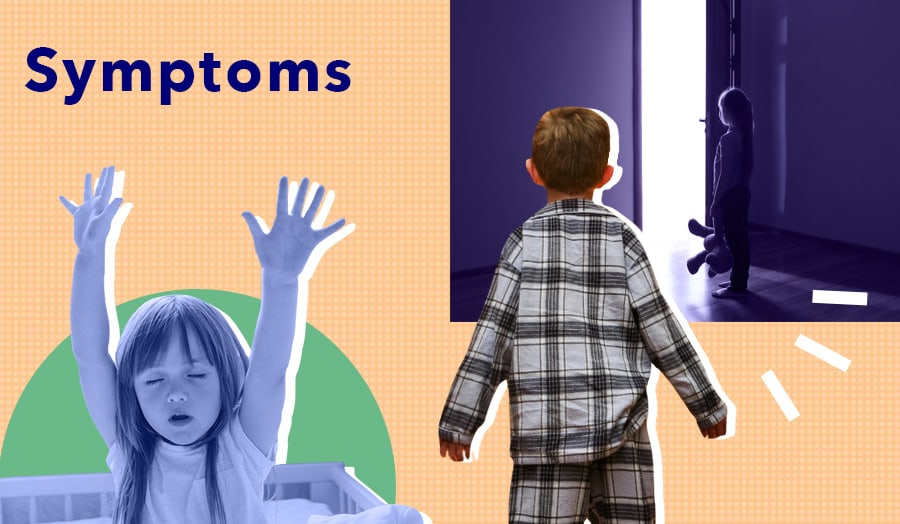 Children may urinate in inappropriate places during sleepwalking episodes, or scream and appear frightened if sleepwalking occurs during a night terror. (3) People who sleepwalk can also experience other parasomnias, such as eating while asleep or confusional arousals.

People who suffer from sleepwalking may injure themselves while they are asleep and not realize it until the next day. In some cases, sleepwalkers may become violent or act out sexually during episodes. Sleepwalkers are usually difficult to awaken and rarely have a memory of their actions. (4)

Sleepwalking tends to occur more often in children whose parents sleepwalked as children, pointing to a genetic link. The sleep and wake system is less mature in children, which may contribute to sleepwalking episodes. (5) Other potential causes include: 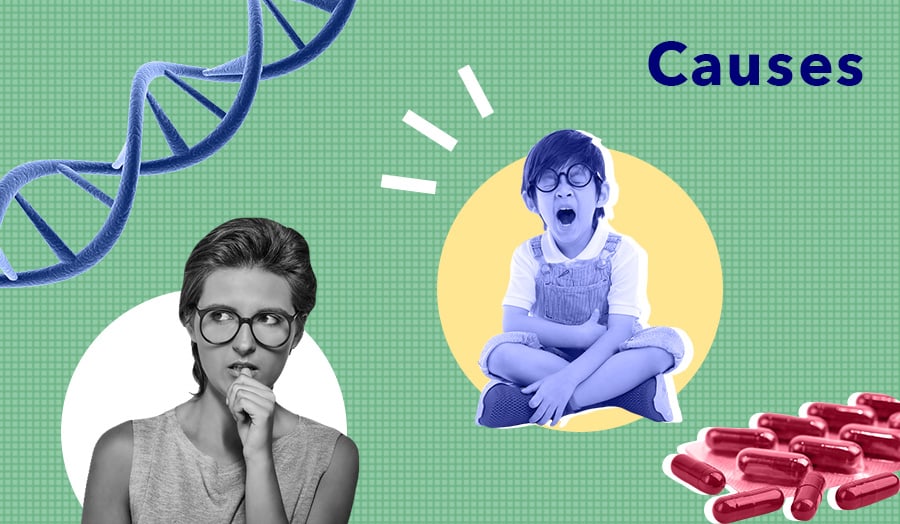 Stress and major life changes such as a move or loss of a family member are common triggers for sleepwalking. There may also be a connection between sleepwalking and mental and mood disorders. (6) Most cases of sleepwalking occur only occasionally and are not an indication of an underlying disorder.

In most cases of sleepwalking, treatment isn’t necessary. For children and adults who sleepwalk frequently or endanger themselves, however, medication or another type of intervention may help. (8) Treatment may also be warranted in cases that involve the following:

Treating underlying medical or sleep issues can help reduce the tendency to sleepwalk and improve the quality of sleep as a whole. Hypnosis may also be an option for some people who sleepwalk chronically. 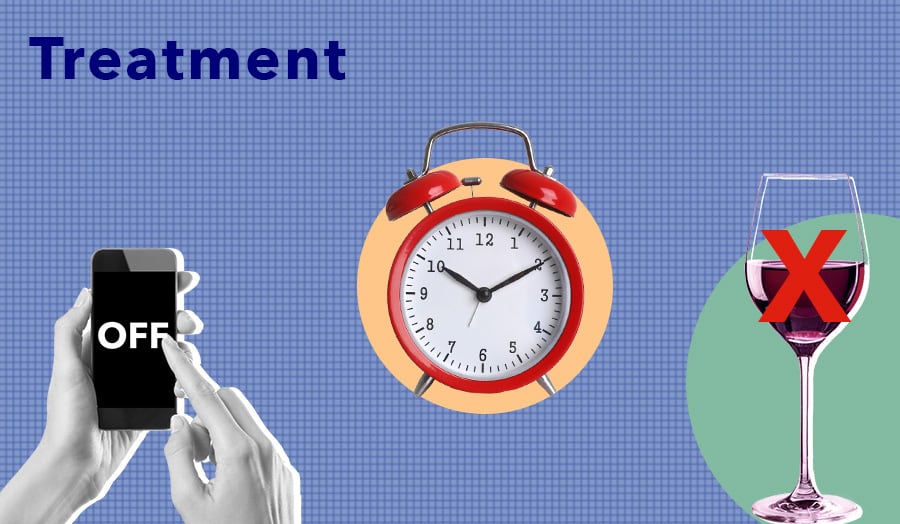 Scheduled awakenings can be effective in reducing sleepwalking episodes, particularly in children who sleepwalk frequently and at a consistent time of night. (7) The goal of this treatment is to prevent sleepwalking by waking the sufferer about thirty minutes before their usual episode occurs. Scheduled awakenings can also help prevent night terrors, a parasomnia characterized by overwhelming fear and physical symptoms, such as sweating and dilated pupils.

All of these medications may cause side effects like drowsiness and dizziness. Because benzodiazepines can cause dependency and protracted withdrawal symptoms, they are rarely suggested for long-term use.

Tips for Parents and Caregivers

Parents and caregivers may not be able to completely stop sleepwalking episodes, but they can help keep a child or adult safe. To lower the risk of injury, consider the following tips:

Following good sleep hygiene can also help decrease episodes of sleepwalking. Sleep hygiene basics include consistent sleep and wake times, turning off electronics such as phones and televisions at least an hour before bed, eliminating consumption of caffeine and alcohol at night, and reducing anxiety and stress to help deactivate the nervous system.

Other sleep hygiene basics include:

Many people know about sleepwalking through movies and novels, and never experience it themselves. The disorder is fairly common, however, particularly in children. Occasional sleepwalking rarely requires treatment, and usually goes away by adolescence.

Chronic sleepwalking or sleepwalking that results in injury may require treatment. Medication is an option in some cases, but is rarely necessary. Good sleep hygiene and scheduled awakenings are often sufficient to decrease the effects of sleepwalking and promote healthy sleep.

What is a confusional arousal?

A type of parasomnia characterized by confusion, disorientation, and difficulty waking up.

The muscles are paralyzed during REM sleep, preventing walking or any other movement.

Do people dream while they sleepwalk?

Though sleepwalking does not occur during REM sleep when most dreaming takes place, some people dream or hallucinate when they sleepwalk.