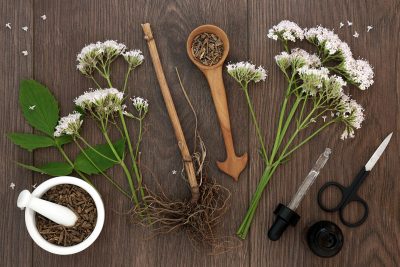 There comes a point when you can’t stand the tossing and turning one minute more. Even if your sleep hygiene skills are top-notch — such as having a consistent schedule, avoiding blue light electronics before bed, and nestling in a cool, dark, and comfortable space — it’s sometimes challenging to rest well. This is particularly true if you experience occasional stress, anxiety, and insomnia.

When a good night’s sleep seems elusive, many people seek out different supplements and herbal remedies. Valerian root* is a popular short-term solution known to induce a more relaxed state perfect for slumber. However, before choosing any non-prescription sleep aid, it’s important to learn all you can about it.

What Is Valerian Root?

A member of the Valerianaceae family, valerian is a perennial flowering plant native to Asia and Europe, which was later introduced to North America. It’s known by many names, including setwall, carpon’s tail, and heliotrope, to name a few. According to the National Institutes of Health (NIH), three parts of the valerian plant are used in herbal applications:

Icahn School of Medicine at Mount Sinai states that because of valerian root’s rather unpleasant odor, its remedies are “often combined with other calming herbs, including passionflower, hops, lemon balm, and skullcap … to mask the scent.”

The medical history of the plant is quite extensive. “Valerian root has been used for centuries as a natural remedy for anxiety and insomnia,” says Dr. Alex Dimitriu of Menlo Park Psychiatry & Sleep Medicine. “It’s believed to have originated in Europe and was first used by the ancient Greeks and Romans to treat insomnia and other nervous disorders.”

Dimitriu adds that in the Middle Ages, Europeans used valerian root to treat anxiety, depression, and hysteria, while Native Americans also prepared it to treat insomnia, stress, and anxiety. In the 19th century, it was used in Europe and the United States as a sedative and to treat anxiety. Later, during World War II, it was a popular alternative in England for people to relieve tension associated with air raids.

How Does Valerian Root Help You Sleep?

“Valerian root works for anxiety by calming the nervous system and promoting relaxation,” Dimitriu explains. “It is thought to increase the amount of GABA, a neurotransmitter that helps to reduce anxiety, in the brain.”

We all have neurotransmitters that relay chemical signals throughout the brain and spinal cord, which are part of the central nervous system. GABA, or gamma-aminobutyric acid, is considered an inhibitory neurotransmitter. This means that as chemical messages are transmitted, increased GABA acts somewhat like a gatekeeper, lessening the ability of nerve cells in the brain to send or receive certain signals. This reduced nerve stimulation is what helps us feel more calm, experience fewer symptoms of stress and anxiety, and perhaps sleep more soundly.

However, research is still somewhat mixed on valerian root’s overall effectiveness. According to results of this recent study, while it demonstrated that “valerian could be a safe and useful herb alone and also in combination in treating sleep problems, anxiety, and associated comorbidities,” it also addresses the uncertainty that due to “the subjective nature of sleep problems and associated mood disorders, there remains a difficulty in determining the best measure for the efficacy of interventions.”

To break that down a bit, valerian root might help curb issues with transient insomnia if an individual is temporarily anxious and stressed because of a major work project. But there’s not enough significant research to determine if the herbal remedy is as effective for someone with an unregulated anxiety disorder who suffers from insomnia as a result of that condition, or for a person who has challenges maintaining proper sleep hygiene habits due to life circumstances.

Consulting a healthcare professional is the best first step to know for sure if valerian is an option to alleviate your current sleeplessness.

How Do I Take Valerian Root?

Dimitriu says the most effective way to take valerian root is by capsule or tablet. “It is also possible to make a tea with the root, but this is not as effective as taking it in capsule form,” he adds, citing results from the study above, which notes that “repeated treatments with the whole root/rhizome consistently promoted sleep quality at 450-1410 mg per day for 4–8 weeks, whereas valerian extracts 300-600 mg per day for 5 days–4 weeks resulted in inconsistent outcomes.”

While not regulated by the U.S. Food and Drug Administration, valerian root products are available as over-the-counter (OTC) dietary supplements. There are also many companies that produce valerian root tea in loose leaf bulk or include the herb in their sleep-inducing blends.

Mount Sinai suggests the following dosages if approved by your healthcare provider:

Dimitriu’s recommendation is to take valerian root 30 minutes before bedtime for best results. Keep in mind: You might not notice any real effects for up to 14 days.

“Valerian root is generally considered safe for short-term use, typically up to four weeks,” Dimitriu says. “It is important to speak with your doctor before taking any supplement, including valerian root, to ensure it is safe for you.”

The National Institutes of Health (NIH) indicate the following people shouldn’t take valerian in any form:

Additionally, there’s a possibility of drug interaction. NIH states that “additive sedative effects from alcohol or sedative drugs, such as barbiturates and benzodiazepines [such as brand name drugs Valium and Xanax]”, as well as “dietary supplements such as St. John’s wort, kava, and melatonin.” Also avoid other sleep aids, whether prescription or OTC, if you plan to take valerian root or valerian root tea. This includes CBD products.

Finally, if you choose to take valerian root tea or other products and schedule a surgery, make certain to tell your physician about it, as having it in your system might compound the effects of anesthesia.

The Side Effects Of Valerian Root

According to The National Center for Complementary and Integrative Health (NCCIH), side effects from using valerian root may include: :

“A few people feel drowsy in the morning after taking valerian, especially at higher doses,” the center states. So make sure you have the opportunity for eight hours of rest. Other individuals also report extremely vivid dreams.

Regardless of its long history as an herbal remedy, valerian root still isn’t medically approved as a concrete method for treating other conditions mainly because there isn’t enough existing evidence to prove valerian’s efficacy at this time.

That said, some anecdotal reports suggest that valerian root products can minimize the symptoms of:

When To Talk To Your Doctor

If you’re experiencing occasional sleepless nights and aren’t sure why, talk with your healthcare provider about possible solutions. Based on your health profile, they might suggest an herbal supplement such as valerian root, ZMA, melatonin, chamomile, or 5-HTP, among others.

Lifestyle changes such as mediation, calming apps, and better sleep practices could also be part of your natural prescription for rest.

We Tried It — Here’s What We Thought

Cody Gohl, former Sleepopolis staff editor: Wow, this is one strong remedy! I felt immediately more relaxed and found it super easy to fall asleep after drinking this tea. Not only that, but I was able to stay asleep throughout the night. I’m not sure if I can attribute all of this success to the valerian root, but from where I’m typing, this remedy seems like a clear winner.

That being said, I’d give this hack 5 out of 5 Zzz’s — maybe not the tastiest, but certainly the most effective one I’ve tried yet.

For some people, valerian root products may ease the cycle of occasional sleepiness lasting less than three months. However, Dimitriu says good sleep hygiene is the foundation for better rest. “Avoiding bright lights, screens, stress, and irregular bedtimes often go much further when done consistently than taking any supplement,” he adds. “Daily exercise and not eating too late can help, too.”

Restrictions and regulations on supplements may vary by location. If you ever have any questions or concerns about a product you’re using, contact your doctor.

When not traveling, teaching yoga, or doing voiceover projects, Tracey is an editorial strategist and content developer for print, digital, and multimedia platforms. Based in the Midwest, she writes on various topics, from addiction science and sleep hygiene to better bonding with pets and interesting nonprofit and advocacy efforts. She also makes a rather snazzy blueberry pie.