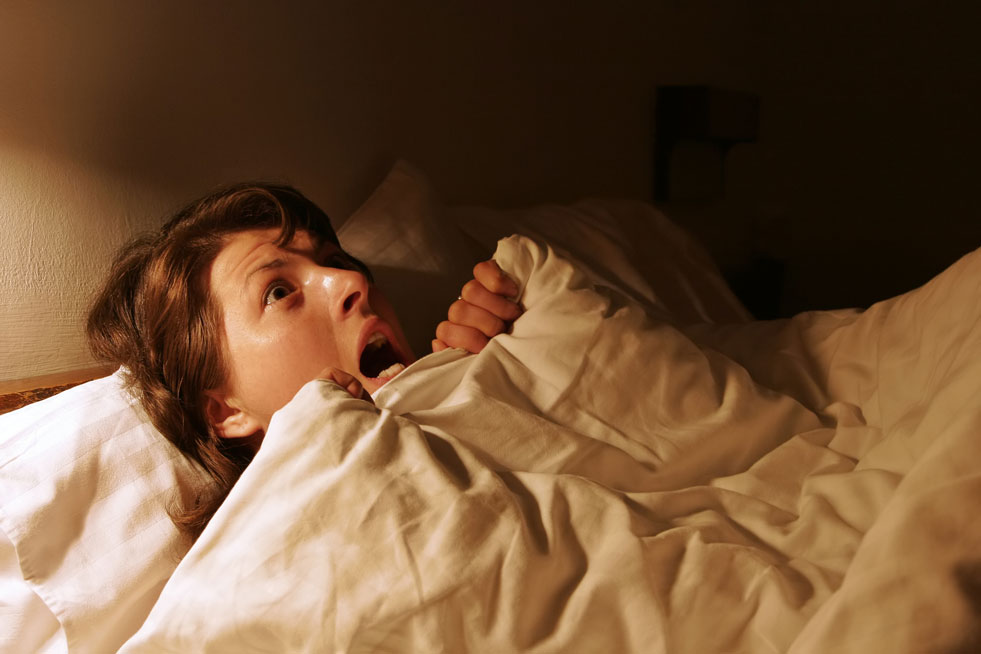 Horror films have been a classic part of the Halloween season. With this spooky holiday coming up, Sleepopolis is taking a deep dive into some of our favorite horror films, exploring how these films look at sleep. First up, A Nightmare on Elm Street. Beware, spoilers are ahead!

If you haven’t seen A Nightmare on Elm Street, here’s a summary of what you need to know.

This movie revolves around two high school couples, Nancy and Glen, and Tina and Rod. The film begins with Tina waking from a nightmare, but the nightmare somehow follows her into real life with cuts appearing on her nightgown. Luckily, her mother wakes her before she’s seriously injured (foreshadowing).

The next day, Tina reveals these nightmares to Nancy and Glen, both of whom had similar nightmares. Each nightmare revolves around a creepy man who is wearing a red and green sweater, a brown fedora, and has knives for fingers. We later learn the villain of these dreams is Freddy Kruger.

With Tina’s mom going out of town, Tina invites Rod, Nancy, and Glen to spend the night, hoping the nightmare won’t return. Sadly, it does and Rod is unable to wake Tina before she is killed in her dream, which — like the cuts from her nightgown — translates to real life.

These life-like nightmares are now haunting Rod, Nancy, and Glen, with each of them describing the same creepy man. Rod is thought to be responsible for Tina’s death and is taken to jail. Then the night he is taken in, Freddy visits him in his dreams, eventually killing Rod.

Nancy is officially freaked out (rightfully so) after seeing two of her best friends gruesomely killed. Fearing she’s next in Freddy’s plans, she refuses to sleep. She takes stay-awake pills and watches scary movies to keep her awake.

Nancy’s parents notice her lack of sleep and begin to worry about her. Nancy explains who Freddy is and how he can only get to them in their sleep, hoping her parents can help in some way. Her parents think she’s crazy, continuously telling her, “It’s just a nightmare.”

Throughout this film there are signs of serious lack of sleep and extremely active dreams. So, that makes us wonder… Could any of this really happen? Are Nancy’s dreams real? Is it just a nightmare — or maybe something else?

Dr. Anthony Tobia, the Associate Chair in the Department of Psychiatry at Rutgers Medical School, may have some answers for us. Starting in 2009, their School of Graduate Studies began to offer the course “Masters of Horror” designed to watch horror movies through the lens of psychiatry.

Dr. Tobia had his students watch A Nightmare on Elm Street and specifically try to diagnose what sleeping disorder Nancy had. Their conclusion was narcolepsy.

Dr. Tobia explained to Sleepopolis this diagnosis makes sense but is not completely accurate, saying, “There’s nothing ‘typical’ about Nancy’s diagnosis. I think most horror fans would agree that Nancy Thompson (and others) operate in a liminal phase between sleep and wakefulness. That’s where Wes Craven (director) set this story.”

He continues, “While there are conditions in sleep medicine that are also manifested during the sleep-wake interface, one such condition is narcolepsy. The fact that Nancy is cast as a teen (a typical age for narcolepsy to start) and demonstrates excessive daytime sleepiness (Nancy falling asleep in class) only makes this formulation more interesting and accurate.”

The National Institute of Neurological Disorders and Stroke (NINDS) defines narcolepsy as “a chronic neurological disorder that affects the brain’s ability to control sleep-wake cycles.” Common symptoms include excessive daytime sleepiness, cataplexy (loss of muscle tone), sleep paralysis, and hallucinations. Nancy has each of these symptoms, except for cataplexy.

In the movie, Nancy falls into REM sleep extremely quickly, normally within three minutes. While this isn’t accurate to real life, it’s another sign pointing to a narcolepsy diagnosis.

At the end of the film, Nancy thinks she has defeated her nightmares, but (spoiler alert) the film ends with Nancy’s mother being killed and Freddy Kruger coming back. There are lots of fan theories that Nancy was in a dream the entire time, which is why there’s never a clear distinction between reality and dreams.

However, Dr. Tobia has a slightly different theory, “I believe that the final scene suggests that Nancy continues to have recurrent nightmares. This is due to her having focused on the content of her nightmare and not its context. Specifically, that her nightmares are part of a larger disorder called Post-traumatic Stress Disorder (PTSD).”

While horror films don’t accurately portray sleeping disorders, Dr. Tobia pointed out their benefit, stating, “In general, Hollywood often portrays mental illness, including sleep disorders, in an inaccurate, if not overdramatic, way. This doesn’t mean that these films can’t be used to educate future physicians and raise awareness of mental health through community engagement.”

A Nightmare on Elm Street explores the extremes of sleep deprivation with a mix of horror, but rest assured, Freddy Kruger can’t harm you in your dreams. Thankfully that’s something we only see in horror films.