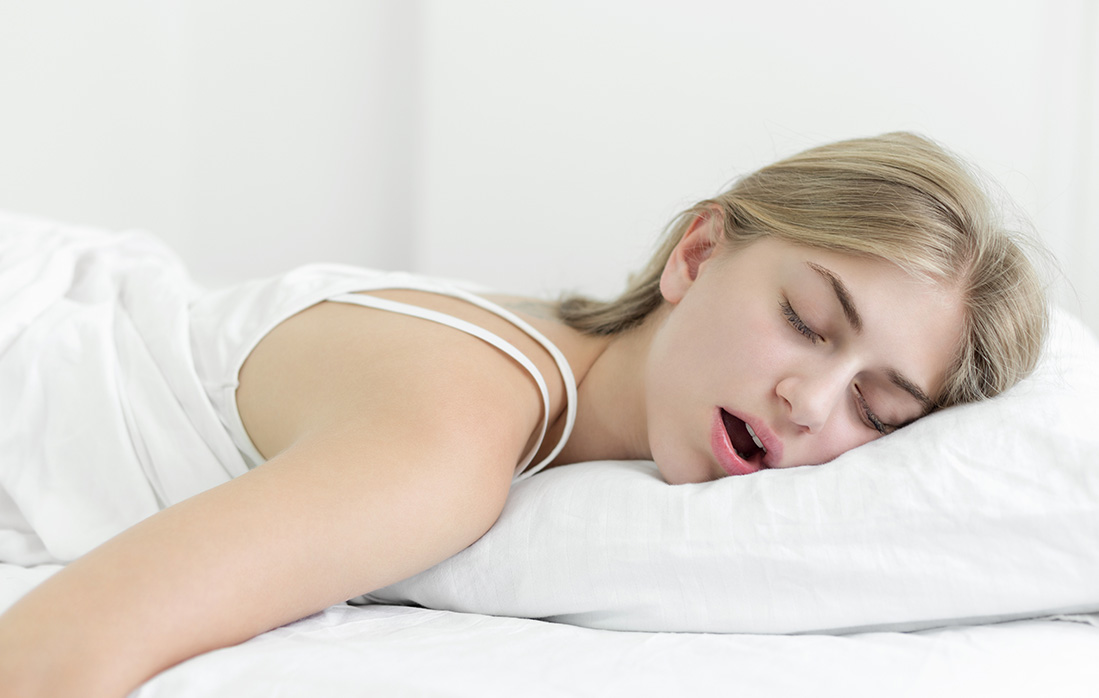 TikTok, the new home for DIY health solutions —from both the most creative to the most dangerous, has another viral trend causing concern among doctors. Influencers like Olivia Sweet, and others, are taking to social media claiming that mouth taping is the solution to sleeping with an open mouth. Sweet explains that she’s been “watching a lot of videos” on why sleeping with your mouth open is a terrible idea, from facial structure changes to causing a double chin, and has concluded she can “train herself” to keep her mouth closed with her tape idea, and daytime awareness of her mouth’s position, to improve the problem in her sleep.

She posted an “after” video, a month later, showing what to her is a more defined jaw line after mouth taping. Here’s what experts have to say about her claims that mouth breathing will alter our faces — and about her risky solution.

To fully understand how detrimental taping your mouth closed can be, you have to think through the reasons your mouth might be falling open in the first place — your body is not dumb. In fact, it might be compensated for another issue, and trying to help you breathe, and therefore stay alive. Dr. Kami Hoss, DDS, a San Diego-based dentist and author of If Your Mouth Could Talk, says, “When relaxed, the tongue is supposed to gently rest behind the teeth on the roof of the mouth and the lips stay gently closed. Breathing is supposed to happen through the nose almost all the time, except if the person is exercising hard or has temporary congestion.”

However, he adds, when the tongue can’t sit in that ideal position, there’s a reason, such as tongue ties, narrow palates, poor tone, or a small jaw. When this happens, the tongue may move backward, and block the airway, interfering with breathing and oxygen intake, which often worsens in sleep when muscles relax, he explains.

“If a person is breathing through the mouth at night it is likely because they have some level of obstruction to the flow of air through the nasal passages. They may suffer from ‘sleep-disordered breathing’ (SDB) which is a spectrum of sleep-related issues with snoring at one end and obstructive sleep apnea, where breathing completely stops and starts again during sleep, at the other,” he says, noting it’s essential to get to the root cause, which could include:

These root causes aren’t going to go away with Tik Tok’s tape and training plan, which isn’t dealing with the true problem.

Double chins, sunken cheekbones, and less prominent jaw lines were Sweet’s fear, which she said was linked to her mouth breathing problem. But research is mixed on just how much of an impact mouth breathing during sleep might have on facial structure, and doesn’t draw such definitive conclusions. Studies have shown that normal nasal respiration is how our faces develop properly, and is necessary for growth of balanced facial structures. Researchers conclude that mouth breathing might lead to changes in the posture of the head and neck, and that chronic mouth breathing can result in an “adenoid face.” This type of facial structure involves a narrow upper dental arch, changes in incisors, an imperfect lip seal, and an increased facial height.

Hoss says, “Children will typically develop smaller mid-faces, nasal cavities and jaws since they don’t experience the normal air resistance.” He also explains that the face may grow longer (long face syndrome), and with a mouth-breather, teeth typically erupt much longer, causing everything from a “gummy smile to a skeletal open bite.”

So, while Sweet might have been using her own explanations for what was happening to her face (no study points directly to forming a double chin), she might have been on the right track that mouth breathing can cause structural changes.

As a child is growing and developing, their breathing patterns, and the resistance that comes from nasal breathing, helps form their facial structures properly. Studies have shown that children in particular are vulnerable to facial changes as a result of mouth breathing. In one study, mouth breathers between the ages of 6-12 were more likely to have a converse face shape, but researchers note the relationship between respiration and facial development is “controversial.”

Adenoids might play a role as well, as enlarged adenoids are associated with higher rates of sleep apnea in children, and those with sleep apnea might be more likely to mouth breath at night. This study adds that the presence of adenoids “accentuated” the facial shape they noted in mouth-breathing children. Other research shows that 12-55 percent of children are mouth breathers, and urges doctors to “pay more attention” to enlarged adenoids in children, which can be resolved with surgery, to potentially eliminate permanent facial structure changes.

Dr. Bill Williams of Suwanee Dental Care in Georgia writes in an explainer to patients that not only are these changes often permanent but can be harmful to the bones and facial muscles. He explains that a raised upper lip, and a lower jaw in a constant open posture is the result, along with a “vacant facial expression.”

This is similar to Sweet’s claim on Tik Tok that the eye cavities might appear sunken in, though she explains it a bit differently. He adds that by age 4, 60 percent of the facial skeleton is already adult-sized, which aligns with the above study saying that at 3 years, some of the traits of an adenoid face can be detected, but that it’s more commonly seen after age 5.

“It would be valuable to know why you need to tape them in the first instance,” he says. “Presently, mouth taping is akin to employing the lowest level of medical evidence at trying to manage a probable structural or physiological problem. It might be more beneficial to discuss your concerns with your dentist or physician, before taking on the newest Tik Tok challenge.”

So, What’s a Mouth Breather to Do?

First of all, step away from the tape. “I do NOT recommend mouth taping at all,” Hoss says. If your mouth is open, it’s often because your body is trying to do its job —to breathe however it can.

“In a person with sleep apnea, as soon as they fall asleep and muscles and tissues of the face, neck, and the mouth relax, breathing problems start. These people usually sleep with their mouths open because those tissues block the airway,” Hoss says. “When the lungs try to expand and can’t, the body releases adrenaline to jolt itself awake. Mouth taping could be extremely dangerous for patients with SDB since it can further disrupt the body’s ability to breathe.”

Instead of tape, there are both daytime and nighttime options for better breathing without resorting to an open mouth. In the daytime, people can use breathing and tongue exercises which will also then help with nighttime breathing, Hoss says. People who are mouth breathing should ask their doctor or dentist about these.

In addition to daytime exercises, treatment options for SDB in adults include:

• Lifestyle changes such as weight loss or reduction of alcohol before bedtime
• CPAP (continuous positive airway pressure)
• Oral appliance therapy: “There are more than 100 oral appliances that have been approved by FDA to keep the airway open by preventing the lower jaw from falling back during sleep,” Hoss says.
• Surgery: soft tissue and jaw surgeries.

As always, head to your doctor with medical questions, especially those as serious as breathing-related issues, rather than trusting Tik Tokkers.