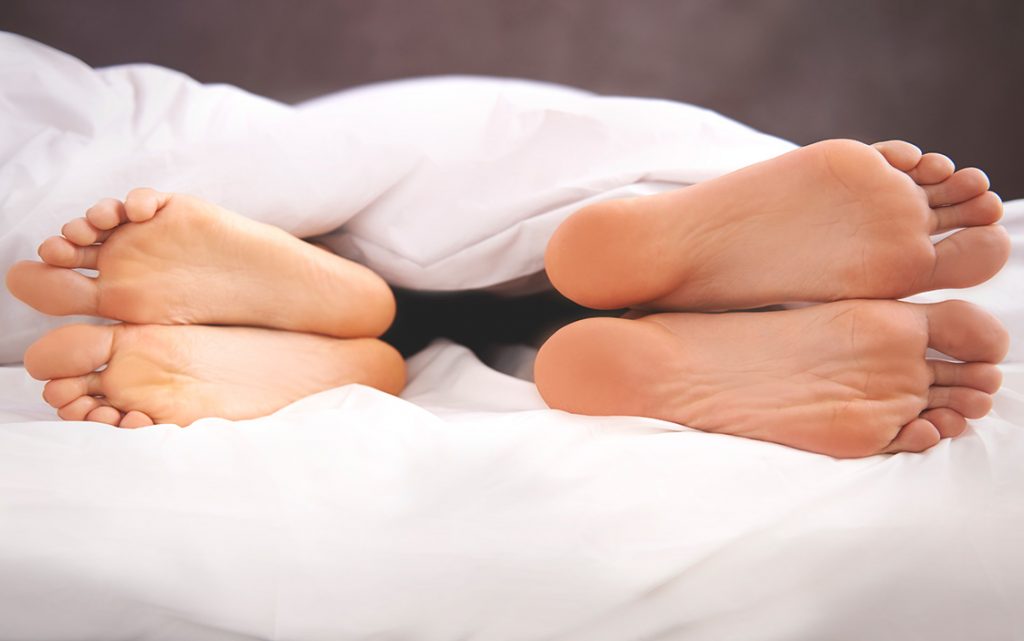 The marriage is great, but the sleep divorce kind of sucks.

My name is Kristen, and I am sleep divorced. There is no divorcer or divorcee—our sleep divorce was a mutual decision.

I suppose that my husband and I were destined to sleep apart. Before having our son, there were nights when he’d stay up late to watch television thinking he could slide into bed during the wee hours of the morning. He’d wake me up each time and I’d boot him back to the sofa. Those were the early-kick out days.

There were other nights when his snoring (caused by sleep apnea) would drive me mad, or he worked a late shift and would again try to sneak in. I didn’t always kick him out; sometimes I’d try to sleep on the sofa. But for me, sofa sleeping was always a challenge (I’m the one with a bad back and neck). He can sleep anywhere, so the sofa became his default.

When I got pregnant, sleep became an absolute must for me. (And I was getting more of it, honestly.)

So, my husband said he’d “take to the couch for a while.”

But he hasn’t come back. And our “baby” just went into kindergarten this fall.

From what I hear, we are a textbook case of sleep divorce. It’s not that we don’t enjoy sleeping beside each other—we do. I often have a feeling of security when I know he is by my side. We sleep apart so we can actually, you know, get some sleep. And that became much harder when we had a child. At first the baby didn’t sleep through the night. Then I had issues trying to get back to sleep after being woken up. Now that sweet boy is up most days before 6 a.m., screaming for me.

Leadley cited a National Sleep Foundation survey that found 12 percent of married couples sleep in separate beds. Another survey found 31 percent of married Americans wanted to sleep divorce. The pandemic brought a lot of attention to sleep divorce, whether it was because couples were spending all day together in quarantine and had opposite schedules…or were dealing with insomnia from all the stress.

It’s not that those of us who are sleep divorced don’t love our partners—many of us do. But a lot of us are feeling that our partner’s habits and behaviors interrupt us from getting a good night of rest. Things like kicking off the covers, hogging the blankets, and the dreaded snoring are huge culprits for many of us who have chosen solo slumber.

“Having one or both partners who snore is a common one. Suffering from sleep apnea which requires a CPAP machine, that while quiet isn’t silent, is another reason you may find a couple has opted to sleep apart,” says Leadley, who said many sleep splits start with (ding, ding, ding) a pregnancy. Anything from different work schedules to bedding preferences can cause a split.

Now, let me say that sleep remains an issue for me. My kiddo doesn’t always sleep through the night, and neither do I. But there’s one thing I don’t have to worry about when it comes to getting to sleep—and that is my dear husband interrupting it (and all the anger I felt towards him when he did).

Getting Back In the Same Bed

When I started exploring the concept of sleep divorces as something beyond a topic we both joke about, I became curious if couples can get back together—you know, if they want to. (Some say that sleep divorce can vastly improve their relationships.)

My husband and I have talked about getting back together (mostly because I constantly tell him that I miss him). Maybe that’ll happen now that my kiddo is in school full-time and I have a schedule that may allow me to sneak in a nap every now and then (you know, only on days I absolutely need it).

But we haven’t made much of an effort to reunite in the nightly bedroom. Mostly this is because we have opposite schedules, he snores louder than a jackhammer, and I honestly don’t want to sacrifice a good night of sleep when it’s still sparse.

Leadley said couples who want to get back together can try. Investing in a sleep study (for both partners) or looking into other remedies can help.

But she said she understands why so many couples are content to be sleep-split. (So do I.)

“Given the fact that both partners are working inside and outside the home, shared responsibilities in housekeeping, childcare and earning income means that everyone is perhaps busier than ever. A good night’s sleep is paramount to a productive day,” she noted.

As much as I miss snuggling next to my husband all night, I am just not there yet. But we do make time to snuggle more, so there’s that.

Even though our son may be the official reason for our sleep divorce, I know that we were incompatible at sleeping together long before he came along. That’s why I’m trying to invite him to bed on nights when we don’t have anything pressing the next day. (That’s rare these days, though.)

Having a son who rarely sleeps past 6am means that I’m probably going to push to stay sleep divorced at least a little longer. But I am told he will grow into a boy who sleeps in, and that could change a lot around here.

Even though I doubt the snoring will ever stop, I still think my husband and I will sleep together again. Maybe not every night, but we’ll start small. (Snuggling in bed together does help, even if we don’t quite make it to a REM cycle.)

For now, I’ll continue to stay on “my side” of the bed. His spot is reserved, even if it’s empty more than I’d like to admit.