We have affiliate relationships where we are paid a commission on sales through some of our links. See our disclosures.

If you tend to run hot at night, picking out bedding and sleep products can be difficult. You don’t want anything that’ll trap heat, and a lot of traditional materials do exactly that. Casper, best known for its bed-in-a-box mattresses, has tried to combat night time overheating with its Humidity Fighting Duvet.

To find out if this duvet truly beats the heat and helps hot sleepers get better sleep, I tested it out for a few nights. In this review, I’ll go over what it’s made of, how it feels, and some pros and cons.

Just want the highlights? Skip to the end for my review summary.

What is the Casper Humidity Fighting Duvet Made Of?

The outer shell of this duvet is made from 100% cotton. Cotton is a great material that’s not only durable, but also breathable, which is perfect for a “humidity” fighting duvet. The outer cover is stitched in a chamber design to prevent the fill from bunching up. Basically, each stitched “chamber” contains some of the fill, so it can’t shift around inside the duvet.

The fill of this duvet includes two fill materials: a layer of merino wool and down fill. Merino wool gets its name from the Merino sheep it’s sheared from and it’s prized for its special properties, like being thermoregulating, moisture-wicking, quick drying, odor resistant, washable, and durable. And down fill is simply the soft, quill-less feathers from the underbelly or chest of a bird.

Additionally, this duvet features corner loops that allow you to attach a duvet cover if you want. However, this down duvet is completely machine washable, so you can use it as a duvet insert or use it as a down comforter and sleep right under it.

This Casper down duvet is available in midweight or lightweight options, which is just how much fill is used. The lightweight will have less fill than the midweight, so it’s a better option for hot sleepers or for use during warmer months. The duvet is also available in three different sizes: twin/twin XL, full/queen, and king/California king.

The Casper Humidity Fighting duvet is only available in one color option, which is white on one side and gray on the other.

What Does the Casper Humidity Fighting Duvet Feel Like?

Overall, the Casper Humidity Fighting Duvet feels super light and fluffy to me. It reminds me of the feel of a puffer jacket — because of the chamber design — but much with a much softer exterior, thanks to the cotton shell. Lying under the duvet, I thought it felt really airy and crisp, because the materials are lightweight and don’t trap heat. But it’s also soft and cushy, like a giant marshmallow blanket (minus the sugar and stickiness).

Is the Casper Humidity Fighting Duvet Good for Hot Sleepers?

The whole purpose of this duvet is to prevent heat from being trapped, and it succeeds. The cotton cover allows for some breathability and airflow and the layer of merino wool helps with temperature regulation to prevent the duvet from absorbing and trapping your body heat.

All of this makes me think that it’s a great option to keep hot sleepers from overheating year round. Or, if you aren’t a super hot sleeper, it could be a great duvet to pull out in the warmer (and sweatier) months.

How Durable is the Casper Humidity Fighting Duvet?

Overall, I think this duvet feels quite durable. All of the materials are high-quality and sturdy, so it should be a long lasting product. The chamber design especially will help the duvet to keep an even fill distribution over time, even after washing. If you want to protect your duvet and keep it extra clean, I would recommend using a duvet cover, as well.

Is the Casper Humidity Fighting Duvet Good for You?

With all that in mind, let’s go over who I think should consider buying the Casper Humidity Fighting duvet, as well as some of the cons of the duvet. 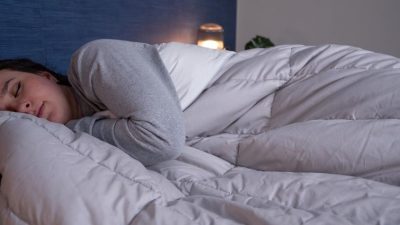 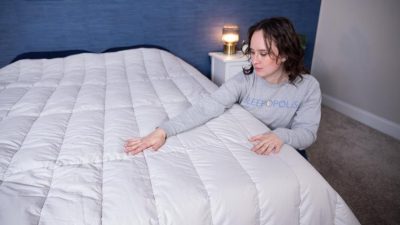 Curious how much this duvet costs? Here are the prices, broken down by size and weight. All prices are listed before discounts. Be sure to use our Casper coupon code to get the best price!

How does the Casper Humidity Fighting Duvet ship?

Casper offers free shipping within the contiguous United States and most of Canada. Customers in Hawaii, Alaska, the Yukon Territory, the Northwest Territory, and Nunavut will have to pay an additional shipping fee.

Does the Casper Humidity Fighting Duvet come with a sleep trial?

Yes, the Casper Humidity Fighting Duvet comes with a 30-night sleep trial, which means you can test it out for 30 nights and if you decide it’s not for you, you can return it within that trial period for a full refund.

Does the Casper Humidity Fighting Duvet come with a warranty?

It does — Casper offers a 1-year warranty on this duvet.

Yep, this duvet is machine washable. Casper recommends washing cold on a gentle cycle with like colors and tumbling dry on low.

Other Products from Casper

Finally, here are my star ratings for the Casper Humidity Fighting Duvet.

Amelia is a Staff Writer for Sleepopolis. She primarily covers bedding and sleep accessory products in reviews, how-to guides, and more. You can also find her over on the Sleepopolis YouTube channel. Amelia is a graduate of the University of North Carolina at Chapel Hill, with double majors in media and journalism and in dramatic art. Outside of work, Amelia can usually be found on a hike, traveling to a new city, or at her local thrift store.